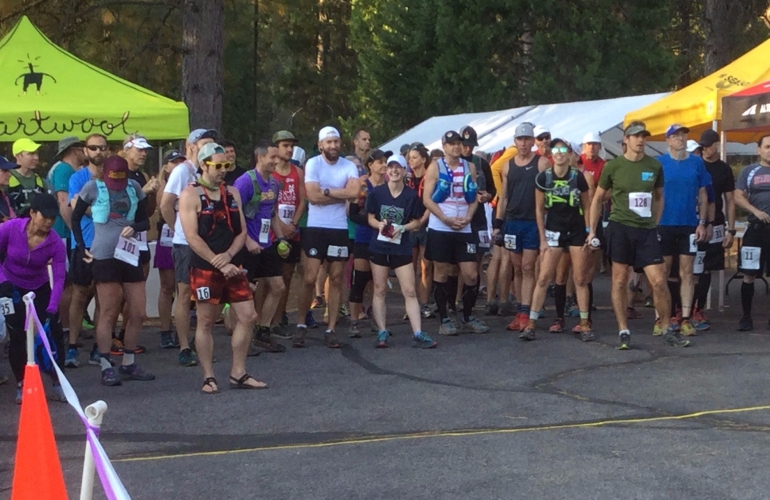 Four years is a big deal in the mind of a restless wanderer. There aren’t many people, places, or races that can keep this girl around for that length of time.

But last Saturday I successfully suffered through my fourth running of Headwaters Trail Runs 50k.

That’s some major commitment. I didn’t even go to the same college for four years.

In fact, I’m pretty sure the last time I devoted four years to something was high school.

So running Headwaters for the fourth time was basically my high school graduation of ultrarunning.

Bear with me here…

Headwaters 50k was my very first ultramarathon in 2014. I finished that race hopping on one foot. But in the years since, I’ve gotten much stronger, smarter, and more experienced as a runner.

Even the course itself has changed with time. A wet winter made the roads more twisted and gnarly than ever before, while maintenance work on the Sisson-Callahan trail brought the second loop of the race one step closer to heaven. HUGE thanks to whoever is out there cleaning that up!!!

But Headwaters Part IV was way better than high school because I got so much more support along the way!

Being a local, I had the added benefit of knowing many of the volunteers that helped the race operate as smoothly as it did. I had friends at every aid station and more at the finish cheering me on.

First, I passed local legend Tina Ure, my pacer from Waldo 100k. Tina hangs the ribbons to mark the course every year and was helping on race day by directing runners at the first major junction, leaving North Shore Road and heading up Rainbow Ridge.

This road is totally runnable, but I chose to apply my standard method of alternating running and hiking. A lot of people passed me during this part, mostly because I started way too close to the front for the sake of this photo op.

Headwaters Trail Runs offers both a 30k and 50k race (and a 10k but that’s totally different). The 30k is the first loop of the 50k course, so runners of both races start at the same time. Since the first loop is less grueling (for me), I’ve always tried to establish my place there.

This year, however, I promised my coach that I would not go out hard.

Shelton: I want you to promise me you won’t go out hard.

Me: Yeah, I know, but the first loop is so much easier and I always hike the Sisson-Callahan part anyway so shouldn’t I get speed while I can?

S: The second loop won’t be as bad if you don’t go out hard on the first.

Me: Okay, right, but my friends are all doing the 30k and they’re probably going to be taking that loop fast and I’m going to want to keep up…

S: mmmmm yeah but you’re better off going into the second loop with more energy than you would be pushing it on the first.

She was right, but I ended up running with my 30k buddy Bobby for a few miles, anyway ;)

I still hiked most of that 5-mile section of single track in the second loop, but I’ll be damned if I didn’t hike it faster than ever before! I was even able to jog some parts. I actually felt really good when I reached the North Fork aid station the first time around.

Huge thanks to my amazing boyfriend Jason for being there to take photos, watch my dog, and do anything he possibly could to support me.

Mega thanks to ultra shero Camelia Mayfield, winner of this year’s Waldo 100k, for giving me a hug (upon request) and taking some pictures of my manski crewing hard.

You have to scroll thru and he’s the studmuffin in the cowboy hat.

Camelia was supposed to run the 50k, too, but some sickness kept her from toeing the line that day. She still came out to support her sister Victoria, who proceeded to win Headwaters 50k for the second year in a row.

Kyle Carson of Ashland, OR won for the men, and I finished 3rd female, which is also pretty neat.

Here’s me coming into the North Fork aid station the first and second times. 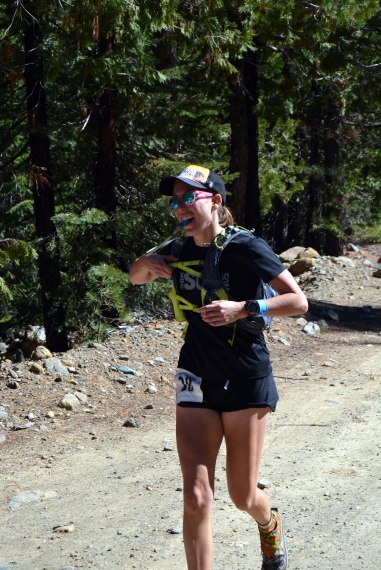 Notice how the first time through I was all smiles and sunshine, while the second time I look like I just crawled out of a grave, covered in blood and dirt? A simple 5-mile loop and one poorly-placed rock was all it took.

Now, look at the photo on the right. The guy you see running behind me is my hero of the day.

His name is Ken and he’s a champ. The first time I saw Ken, he was walking DOWN the Sisson-Callahan trail. The opposite direction of which the race was going.

Ken finished right behind me.

You are fucking awesome, Ken!

Headwaters is not an easy race. Pretty much every step is on a rocky hill, going up or down, and some are kiiiind of steep.

I knew it was not a course to PR. My 5:38 time from this year’s SOB 50k was out of the question. But I did go into this race with an ambitious goal of finishing sub-6 hours.

By the time I ran out of North Fork the second time, I knew in my bones that wasn’t going to happen.

But that was fine. Jenn also told me to keep in mind my original goal, the one that’s written in my training plan- to finish Headwaters in under 6:30 and without injury.

My energy shifted when I realized I had more than enough time to meet that goal. That’s when I started really thinking about my progress over the years.

That’s when I realized I was about to graduate high school.

Before I knew it, High Divide aid station was in sight. The volunteers from Shasta Mountain Guides gave me a warm welcome and my friend Heather took this awesome photo.

SMG co-owner Chris Carr, who has been manning High Divide for as long as I’ve been running Headwaters, asked me if I remembered two years ago when the race was still held in August and it was over 100º by the time I reached that aid station.

My answer: I will never forget.

That was the only other time I’ve placed third in this race, and my time was still hovering around 7 hours. I only scored a podium finish because it was so damn hot that all the stronger runners dropped out.

The only clear memory I have of that day was one of Chris’s volunteers handing me a cold can of Pepsi.

side note- I’ve always felt like my hidden superpower in ultrarunning is my innate tenacity. I may not be very fast but I can power through some brutal shit. That’s why I always run Headwaters 50k instead of the 30k.

The torture really brings out my strength.

Anyway, I love this aid station and almost ended up volunteering here instead of running the race.

TBH- I was on the fence about whether to run or volunteer at Headwaters for over a month.

My body and mind took a long time to recover from Waldo. I knew Headwaters would be hard. I was expecting a lot of myself and the pressure was literally frying my brain.

It was hard, but I’m so glad I did it. The pain I experienced by pushing myself beyond my comfort zone was nothing compared to the sharp sting of regret I know I would still be feeling had I not participated.

This was my last (ultra) race of 2017 and I can’t imagine a better way to celebrate a great fucking year.

I am so grateful for every single person that was out there that day as well as a handful who couldn’t make it.

Thanks to all the runners. I love meeting you, asking where you’re from, and welcoming you to Mount Shasta.

Thanks to all the volunteers. You’re just totally amazing. I love you, for real.

Thanks to the weather for being ABSOLUTELY PERFECT for a fall race in NorCal.

Thanks to the event sponsors. I was so stoked to geek out about shoes with Altra athlete Zach Bitter and win some Smartwool socks… as well as my fourth Headwaters Klean Kanteen pint glass. (Do you still call it a glass if it’s made of steel?)

NOW I HAVE A WHOLE SET!

Thanks always to my family, friends, and running buddies for the neverending support.

Thanks to Coach Jenn Shelton for being the goddess in charge and continuing to inspire me and countless others every damn day.

Extra big thanks to race director Gerad Dean for being the evil mastermind behind this operation.

Gerad was there for my first 50k of 2017 at The Gorge (pour one out for the gorge- now burnt to a crisp) and my last at Headwaters.

Way to be the wholesome, nutty bread that held my ultra sandwich together.

My goal was to finish feeling completely wasted with nothing left in the tank.

And that’s exactly what I did.

Thanks to whoever let my wobbly ass lean on them at the finish.

The first three times I ran this race I only improved by a few minutes each year.

Coaching undoubtedly had a lot to do with this. Big love to Trails and Tarmac for an amazing race season.

Now for a little breather before I start training for my first 100 miler next year ;)