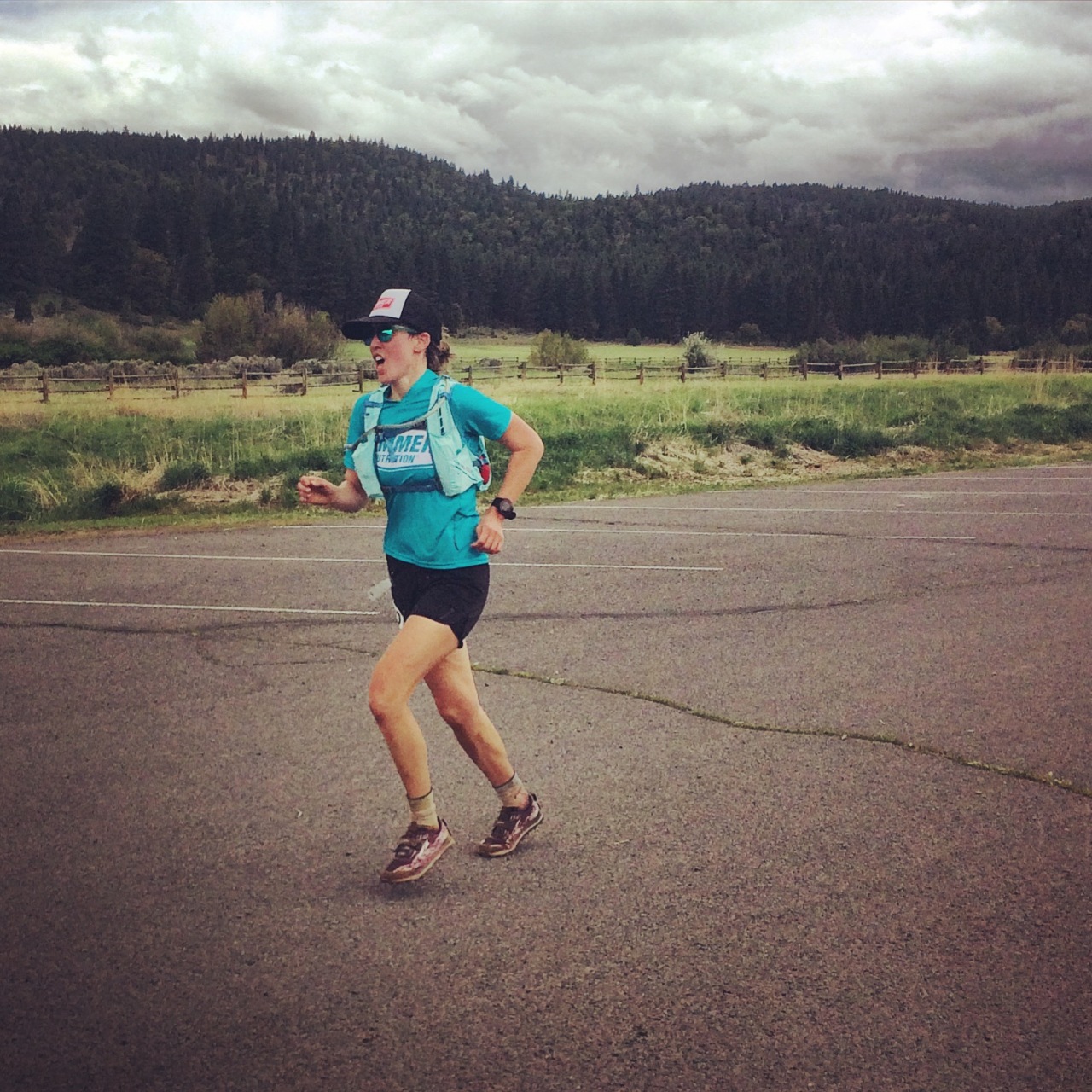 After a rough start to my 2018 race season, Paiute Meadows 50k was a great success and excellent way to start the year.

Like any ultra, there was nothing easy about this race. But there wasn’t anything particularly painful or tedious about it either, which kind of sets Paiute Meadows apart from some other ultras I’ve run.

The course was awesome. With a wide variety of settings and trail conditions that started off in a grassy meadow, moved to logging roads and a rocky, dry creek bed, then headed up “heart attack hill” on well-maintained mountain bike trails lined with wildflowers, there was no chance of boredom.

I didn’t run with my phone but snagged this beautiful photo of the many wildflowers you get to see along the Paiute Meadows Trail Runs race course from the event’s Facebook page. Photo by Lisa Urquizu

This was, hands down, the most well-supported race I’ve ever run. We’re talking aid stations, water drops, and volunteers directing runners nearly every few miles.

Race director Linda Powell was beyond supportive, and it’s clear I’m not the only one who thinks so. The whole town seemed to get behind this race.

You saw volunteers from groups like the Scouts, Americorps, Rotary, and more manning the aid stations, along with Linda’s own family keeping runners on course. The vibe exuded a sense of small-town community with a professional level of organization.

Also- one of the sponsors was Lassen Ale Works, and they had beer at the aid stations! I was sooooo tempted to have one but didn’t know how it would mix with the Hammer Perpetuem I use as fuel. I’ll ask my friendly Hammer representative for next time…

So, let’s start at the beginning.

Paiute Meadows Trail Runs include a 4.5 mile, half marathon, and 50k race, all of which start and end at Susanville Ranch Park. The three race times are staggered, but still found runners of all races sharing the trails.

Luckily, everything was so well-marked, you’d have to try to get lost. I’m a pro at getting lost, so really appreciate well-marked race courses.

One thing I noticed and appreciated was seeing people of all fitness levels out there on the trails. I used to be very overweight myself, and never had the guts to enter a race until I slimmed down significantly.

I admire those who went out and pushed themselves while clearly having a good time. Seriously, way to go!

The 50k starts with a relatively flat 15-mile section that loops back to the finish.

After that loop, you come back to the start/finish, where my amazing boyfriend was waiting with two fresh bottles of Perpetuem, which would fuel me through the second part of the course.

I told him to expect me back in 2.5-3 hours after the race start and got a little nervous when I was running ahead of schedule. Not that moving faster was a bad thing, but I knew Jason was tired and was afraid he’d be asleep in a cuddle puddle with the dogs in the van.

My worries vanished when I saw him leaning on his crutches along the race path, holding open my drop bag for me.

Without an ounce of concern about who was paying attention, I shouted, “I have to pee!” for all the world to hear.

At least I was hydrated.

My trip to the toilets allowed my new friend Steve to catch up with me. Steve is a 55-year-old runner who finished his sixth ultra in three months that day, wearing neon pink compression socks. Beast.

We spent many pleasant miles chatting and passing one another throughout the course.

Chomping on a salty potato at the start/finish aid station. Photo by Jason Northen

After the first loop, the second “half” of the course heads up (and up and up) a big hill.

Let me tell you about that climb.

I thought I was prepared for it. I studied the race map and the elevation profile. I even talked to my friend Lee Ann, a local ultrarunner who’s finished Paiute Meadows 50k.

Lee Ann filled me in on what to expect in the second half of the race, but I seemed to cling to the words, “the end is all downhill.”

This is true. But “the end” really didn’t start until mile 28.

So, cool, yeah. It’s ALL DOWNHILL WOOOOOO! But you have to climb for 28 miles, first.

For some reason, I thought the climb would be more like 8 miles steady uphill and the same down.

I felt good throughout most of the race, but miles 20-28 were where I needed to dig deep. Some runners I’d been leapfrogging passed me by, expressing small sentiments of concern about the state of my quads or the thick crust of salt on my face.

I was just walking at that point. So over running. I’d hit the wall I crash into during any run over 20 miles. I even played with the idea of dropping out at an aid station, just because I was tired.

Then I remembered other words Lee Ann said, “It’ll be mentally tough, but it’s all in your head and you know you can do it.”

When I looked at my watch and saw that I was still climbing at mile 27, I thought I might be losing my mind. I wondered if I got off-course, but a half-second later, I saw another pink ribbon.

“It’s all in my head,” I started singing to myself.

Then I just paused a moment to look around. I left Jason with my phone, so couldn’t take any photos myself, but was lucky to meet a lovely lady named Shannon, who took this video of that same part of the trail.

Sometimes you just need to take a deep breath and look around you to completely change your state of mind.

BTW- Shannon slayed her first 50k that day, finishing strong right behind me. Go Shannon! Welcome to the club of crazy people <3

As promised, the very end of the race was a smooth downhill. The trail was designed for mountain bikes, making it easy to cruise through the berms without slowing down very much. This is MUCH nicer than the tight, 180º switchbacks you often find on pedestrian trails.

Being more of a downhill demon than an uphill bounder, I let loose on the final few miles.

At one point, a dude caught up and started pressing me from behind. I saw him coming, and picked up my pace. He ended up right behind me anyway, forcing me to evaluate how much harder I could push without blowing out.

I decided that letting him pass was unacceptable, and went full-throttle from there. At some point, after the trail evened out and right before I hit the pavement at mile 29.99, I tripped out of fatigue and lightly skinned my knees.

The fall shook me up a bit, but didn’t hurt. I got up laughing, feeling like I got the full experience of a trail run now that I had some dirt and blood on me.

Later, I learned that guys name was Joe, and he never intended to pass me, anyway. Well-played, Joe.

Sometimes you need a good pacer to kick you in the ass a little bit.

Running to the finish the second time, my real finish, gave me the same surreal feeling I get at every finish.

My finish line face is fierce at Paiute Meadows 50k

It’s like… God, what just happened? Did I really do that? Give me a big hug!

And there were many hugs.

I finished in 6:12, which made me very happy, especially considering the major doubts I had before the race. I’ve been prioritizing work and other life things over my workouts and hadn’t run over 16 miles in the past few months.

Oh, well- still got it! All that worry for nothing, as usual.

I was stoked to see ultrarunning phenom Molly Schmelzle at the finish. Molly is an Ashland-based runner and endurance coach who not only won Paiute Meadows 50k for the women, but smashed the course record previously held by Beverly Anderson-Abbs!

The men’s record was also beat by Derrick Jenkins, but I get more excited about following female ultrarunners.

I’m proud of everyone. You all crushed it!

Humongous thanks to Linda and her all-star team, to all the volunteers and sponsors, to Shannon for sharing her videos, to Molly for helping me get in shape for this event, to Hammer Nutrition for helping me fuel right, and to Jason for being the most supportive partner ever.